The Best Star Trek May Be Non-Canonical

-
Spotlight:
Planetary Union Captain Ed Mercer commands the Starship Orville as he, and his eclectic crew, explores the galaxy.

Photo Courtesy of Amazon's Affiliate Program.
Show creator, and star, Seth MacFarlane brilliantly straddles the line between literary allusion and plagiarism with this hit Fox series. While the alien races, ship designs, and technical babble are different from those of Gene Roddenberry’s well established universe, The Orville throws an obvious nod toward Star Trek: The Next Generation. The color coded uniforms, pristine well-lit ship, and bridge layout all remind one of televised tales of Picard’s heroic crew.

Sure, this show focuses much more on comedy than its predecessor, but between the jokes one will find well written science fiction stories filled with excitement, intelligence, and heart.

Technically it’s not Star Trek, but Thursday nights, at 9pm, it’s a fun way for fans to get their Trekkie fix.
-

The Best Star Trek May Be Non-Canonical:
I've been watching Star Trek since 1977, and attending conventions since 1985. I'm a Trekkie in every sense of the word. 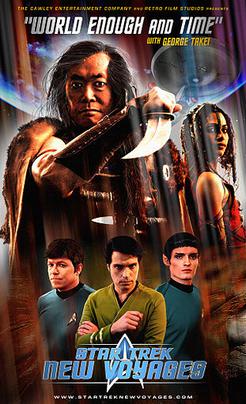 Subject: This image is a promotional poster for the Star Trek: New Voyages series
Star Trek fans, in general, are known for being... exuberant.  Most of us get our "Trek on" by dressing up and attending conventions once or twice a year.  However, a hand full of zealous fans, apparently, weren't satisfied with this level if fantasy, so they've taken it to the next level.   They've written and produced their own episodes.

The first of these fan-run production companies, I was aware of, was James Cawley's Star Trek: New Voyages.

With himself in the starring role of Captain James T. Kirk, Cawley & company produced 10 episodes of Star Trek, complete with authentic looking sets and costumes.

If the quality of the production wasn’t impressive enough, somehow they were able to pay Trek stars, including; George Takei, Walter Koenig, Denise Crosby, William Windom, and others; to do guest spots in episodes. Keep in mind, since they don’t hold the copyright to Star Trek, they’re not allowed to make ANY money from these episodes. These are purely products of the love of Star Trek.

Star Trek was always at its best when it used stories to talk about contemporary issues. The writers of this series didn’t forget that simple truth. One story arch, beginning with episode 4, involved Kirk’s gay nephew coming out to his womanizing uncle. Seeing Captain Kirk officiate a same sex wedding was marvelous.

Sadly, after ten episodes production ceased in 2015 and their website came down. However, the web series can still be found on YouTube.

I thought Cawley’s series was the only game in town. Not so, Number One Son. As it turns out, YouTube is peppered with such productions. The makers of the movie, Starfleet Academy, hired William Shatner, George Takei, and Christopher Plummer to star in their story. Walter Koenig stars as Admiral Chekov in Star Trek: Renegades, while the crews of the Farragut and Exeter explore space with entirely original casts of characters.

Of course the quality of the special effects, sets, acting ability, and wardrobe varies from production to production. Yet, motivated by love for the show, they've each captured the spirit of Star Trek in a way CBS’s current offering hasn’t.
-

Email ThisBlogThis!Share to TwitterShare to FacebookShare to Pinterest
Labels: TV

- In 1999, George Lucas gave fans the first chapter of Darth Vader's origin story.   While Phantom Menace was, unquestionably, the wors...

Things From Another World (I buy my comics at their Beaverton shop.)